My taste buds and I spend most of our time hanging out with the wines of the eastern
United States and Canada: our passion, our wheelhouse. However, every now and then we remember that the rest of the wine world exists and we venture out to explore; it’s very important not to become too accustomed to a “house flavor,” so to speak. Understanding a wine in the context of its region and place in the wide, wide world of wine is both palate-calibrating and fun. So, when the opportunity to learn more about Two Hands Wines of South Australia through #winestudio’s interactive social media tasting program came along, my interest was piqued. 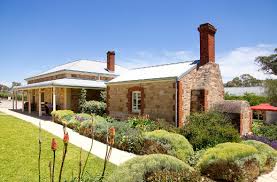 Two Hands Wines was founded in 1999 by friends Michael Twelftree and Richard Mintz with the intent to stand out from the sea of large producers who managed to stay afloat during the decade-long Australian grape glut by driving down their retail prices and decreasing quality. According to winemaker Ben Perkins, “It was a hard time for sure, but we were positioned well with good brand equity; [the] industry is still recovering.” As stated on Two Hands’ website, “With so much Australian wine being sold around the globe under multi-region labels in a formulaic style, the intention was to break the mould and showcase the diversity of Australian Shiraz by highlighting regional and vineyard characteristics by allowing the fruit to be the primary feature of the wines.”

#Winestudio participants evaluated wines from the Barossa Valley and McLaren Vale, both famous for high-quality shiraz production. Barossa is a continental climate and experiences weather extremes like cold winters and long hot summer days. McLaren Vale is situated on St. Vincent Gulf and experiences a more moderate Mediterranean climate, with warmer, wetter winters, hot dry summers, and cooling winds because of its proximity to the coast and the Mt. Lofty Ranges. Given the differences in their climates, Barossa typically produces wines that are big, juicy and fruit-driven, and McLaren Vale produces wines that are more balanced, herbal, and spicy in character. Two Hands showcases the regional differences in their growers’ vineyard sites with well-made wines at several price points.

The Pictures Series (closed with screw cap, for any other “cork dorks” who may be interested)

2014 Gnarly Dudes Shiraz (Barossa Valley): Aged in all French oak with 15% new barrels. Slightly lower alcohol at 13.8% ABV. Smells like rose petals, blackberry/black cherry, cassis, slight powdered sweet cocoa, and high-tone vanilla. Much lighter on the palate; the body is less complex than Angels’ Share. More linear, with medium tannin. More prevalent oak markers: vanilla, toast, caramel. Day 2 added smoked meat, more vanilla and pencil lead to the nose.  Named for the gnarly old vines from which these grapes were harvested, or for “The Dude” character from the film The Big Lebowski, or both—you decide. $36 retail

2015 Sexy Beast Cabernet Sauvignon (McLaren Vale): Named as an homage to Ben Kingsley’s character, “a real badass,” in the 2000 British crime film, Sexy Beast. At 14.5% ABV, it’s nicely balanced and the alcohol is not overwhelming to my cool-climate palate. The tears running down the side of the glass were thick and prettily purple-tinted. The color denotes a very young wine: ruby red with a purple rim. This wine’s aromas include cassis, blueberry/violets, green bell pepper, black pepper, mint and black fruits. The palate evokes much of the same with blackberry, ripe black cherry, medium tannin, and a cedar finish. Very perceptible toasty oak, with this wine being aged in 15% new 300L French oak barrels from a cooperage in Cognac (characteristically bold toasting) and the remainder still picking up aromas from one- to five-year 300L French barrels. $36 retail

The Garden Series (closed with Diam agglomerated closures)
Bella’s Garden 2014 (Barossa Valley): Blood red. Nose is hot, boozy, very ripe with notes of violets, spice, black olive, cola, black/blue fruits, pomegranate. I loved this wine for its combination of complexity and balance. Ripe and rich but not overextracted. Big and mouth filling, but balanced. Not as boozy as the nose initially led me to believe. Subtle mushroom, black/blue fruits, dusty tannins, vanilla/chocolate/caramel/toffee/coffee from the 16% new French oak, long cedar-y finish on the palate. My favorite of the bunch! $69 retail

2012 Ares Shiraz (Barossa Valley): Always 100% Barossa Valley fruit and aged in 25% new oak for 23 months, Ares is one of Two Hands’ big, bold flagship wines. If you like huge, ripe, high-alcohol wines, you will be thrilled at what awaits you with Ares. At 15.5% alcohol, it seems almost like an appassimento-style or fortified wine, with immediately noticeable viscosity and thick colored tears running down the side of the glass. The nose presents raisin-y, very ripe blackberry/black plum, and violet notes; the oak markers include lots of baking spice, musk, and a touch of smoke. Extremely aromatic. At first sip, I wrote, “Jam! Spice! A little boozy vanilla. Juicy sweet black cherry. Spice! Spice! Spice! Same as nose. Cedar on finish.” These flavors are not for the faint of heart. Because of the extra care, extreme barrel sampling by the winemakers (about 100 barrels per day until all 2,000 barrels are tasted!) and “best of the best” selection that goes into this blend, the price tag is not for the faint of heart, either. $185 retail

Disclosure: Wine samples were provided by the producer for the purpose of the #winestudio social media program. All opinions are my own.

This site uses Akismet to reduce spam. Learn how your comment data is processed.

Imagine my surprise to find this teeny-tiny @cavespringvineyard #riesling split at the restaurant down the street from my house! I love supporting my clients everywhere I go, but I don’t run into too many Canadian wineries in Michigan. 🥂 #onwine #vqawine
Control • again and again 👀
Good morning. #sunrise #nofilter #michigan #monday
#thankyou #weloveourcustomers #happynewyear #2023 #vintage2023
The Dream fundraising wine project to benefit the @miwinecollab Inclusion/Expansion scholarship fund is coming soon! Proceeds from the purchase of this wine will go to fund wine education scholarships (certifications or production classes) for BIPOC, LGBTQ+, women, and differently-abled Michiganders, making our wine industry bigger, better, and with a brighter future. #miwine @drewryanwines @chateau.chantal @houseofpurevin @domainedetroit
Someday I will leap out of bed and straight onto a treadmill. Today is not that day. Who can relate? 😉#yolo #happynewyear #goodmorning #newyearsday #cheers #2023